This is just a collection of observations related to lifting right now.

That is, week 3 of the 5/3/1 template. Week 3 is when you lift the most that you’re going to lift that month. The idea is that after week 3 you are going to take a rest (deload) for a week. This seemed like a good time to throw in finihsers. 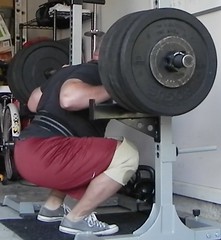 Finishers are ways of doing exercises at the end of a workout that are kind of un-conventional. Normal exercises are prescribed with sets and reps and you work through them. Finishers are a-typical. If you did them all the time you might burn out but they are good to do occasionally to get results.

Here are some examples of finishers:

I’m doing 2 strip sets at the end of every workout for the 3rd week of 5/3/1. I like it. I don’t have it in my spreadsheet so I could see leaving it out if I’m not feeling it.

Here are the exercises I’m doing for each day:

I bought a pull-up bar. I got the Stud Bar, seemed appropriate for me. One of the provided bolts snapped, I may have not drilled deep enough into the rafters. Even with only 3 bolts in, the thing is solidly in place. And the bar is thick. I’m a tubby man and the bar doesn’t bend at all. 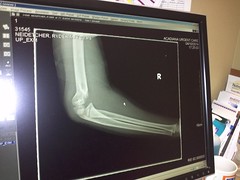 One bad thing about having pull-up bar is that my 7 year old son climbed up a rope I had hanging from it, fell down and broke his arm. We did have some foam padding under the bar but obviously it wasn’t enough to prevent that injury. That entirely sucks and is squarely my fault. But it’s a somewhat safe lesson in his own mortality that will serve him well.

I haven’t done pull-ups since I stopped working out at the local gym. I was doing pull-ups in-between every pushing movement as prescribed by Jim Wendler. So yeah it’s been a year with no pull-ups. I haven’t tried to see how many I can do. I’m very conservative when I introduce or re-introduce movements back into my routine. So for now I’m just doing 1 pull-up in-between each pushing movement on press and bench days. Next month I think I’ll attempt 2 pull-ups and see where that gets me.

Doing pull-ups along with backing off the press weight a little bit has my shoulders doing much better.

Speaking of backing off on the weight. I have either stayed level with where my weights were or in the case of the press I have come down a little bit. It just seems that I need to not push it quite as much as I have been. When you take something away hopefully you’re adding something back that moves you forward or challenges you. I think that’s what I’ve done.

Iso-lateral means that you’re doing something favoring or just using one side of your body. If you’re using a machine you can probably isolate things very well. If you’re using other equipment like a kettlebell, dumbell, landmine or pulley you can’t isolate things very well. But that’s not so bad because this imbalance causes all sorts of interesting muscles to engage to stabilize and firm up your body so you can perform the exercise. Really this is good stuff for the core and will make for a more solid human.

I like the movements. I feel like it’s kind of shoring up my strength. Building a stronger base. I was watching a video from Mountain Athelete. They train military people and mountaineers. I believe he used the phrase combat chasis. Really from the chest to the knees, that area that is going to be carrying the load where you really want to be strong.

Here are the iso-lateral movements I’m doing these days:

I did the math and figured out how low I could start on the bench, add 5 pounds a month and still end up at benching 285 at the end of the year. And that’s where I put my bench. I still feel sub-optimal when I bench. It’s an exercise that I kind of don’t have a lot of respect for and I’m in no rush to see it go up. It’s the typical meat-head barometer for how strong you are but has little carry-over in the real world. Unless you find yourself with your back firmly pressed on a flat surface and a desire to press in a perpendicular direction to your back.

My paleo-ish perma-bulk could probably use some dialing back so here are some tweaks I have been making.

My music was getting old. I did the lazy thing and actually bought some music instead of working hard to pirate it. I should spend 20 minutes to clean up the list below to remove all the un-necessary information. It’s especially in-excusable because I’m awesome at VIM. But I’m still not going to do that. This is what I get when I copy and paste my playlist from iTunes.

You got your dubstep, old school rap, pop, new rap, metal. It’s working for me.